Old-fashioned, creamy, cheesy Southern Potato Soup is the perfect comfort food for any day. This soup is homemade with a buttery roux consisting of flour and milk.

How do I make an old-fashioned Southern potato soup?

This chunky, old-fashion baked potato soup can be made from scratch. And, it’s easy because it’s all made in one pot.

First, you’ll start with a stick of butter melted in a pot. Next, your ad and flour to form a roux, stirring constantly.

Then, slowly add in your milk, while whisking constantly. Here, you’ll want to reduce heat and continue whisking until the base becomes thick and hearty.

Finally, add in your baked potatoes by cutting each open with a large tablespoon. Scoop out chunks of potato from the inside, leaving the skin.

Top with your favorite toppings and you’re done!

What toppings can I add for loaded potato soup?

Serve up this old-fashioned baked potato soup with

Can I add corn to potato soup?

For this soup, we added corn to make it even heartier, like a loaded bacon potato chowder.

If you don’t have corn, you can swap it out for peas or broccoli.

Can I make potato soup in the crock pot?

I do not recommend making this soup in the crock pot, as the butter and flour mixture would need to be constantly whisked.

However, if you’re in a pinch, you can use a few cans of cream of potato with chopped potatoes on low for 4-5 hours. The potatoes are finish cooking when they are soft. This is similar to recipes you might find at Campbell’s.

Can I freeze potato soup?

Yes, you can freeze the soup well if it is in an air-tight bag. The soup should not be thawed and then re-frozen, however. It is best kept in single-serve bags during freezer storage.

What to serve with potato soup 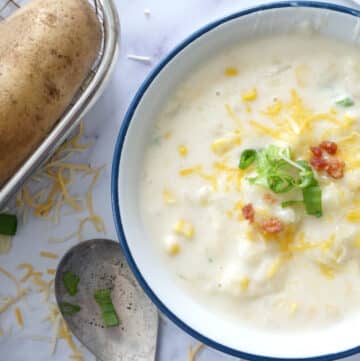 If you like Southern baked potato soup, you’ll love:

Classic Southern Cornbread
Traditional, Appalachian cornbread made in a hot cast-iron skillet.
Check out this recipe